Voting Is Open for the 2022 Ultimate Stylist Competition

On the Road with Rae Radick

If you didn’t just walk out of a cave & logged into the internet for the first time, there’s a good chance you have heard how technology sound Samsung products are. The South Korean electronics major is renowned for its impressive lineup of gadgets & appliances. But in the smartphone-verse, the company has a cult-like following; & a crazy market share here in India. In 2020 Q2, Samsung led the
smartphone market share like a boss. This company has been making smartphones from well over a decade now & knows exactly what end-users need from a modern smartphone. It is no wonder that Samsung dominates the entire smartphone market. To turn up the heat in the upper-mid-tier segment, Samsung has a new offering that’ll truly set it apart from the rest. 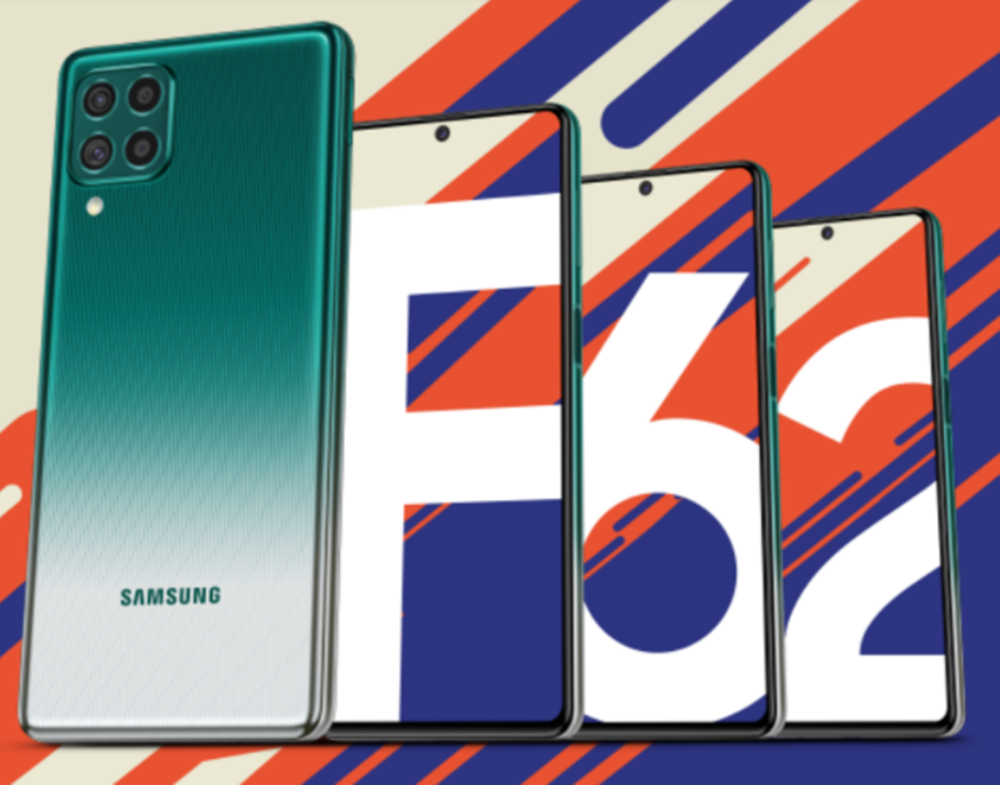 the mighty flagship 7nm Exynos 9825 processor the #FullOnSpeedy Samsung Galaxy F62 is a blazingly fast, funky, fun and edgy device that packs everything you will ever need from a smartphone. A massive screen, latest camera, a swanky design, but most importantly, the smartphone has two unique & industry-leading features that’ll seal the deal for you, for sure!

If the expected price tag is true, Samsung has a winning smartphone in their hands! The smartphone comes baked with a flagship 7nm Exynos 9825 processor & considering the ‘rumoured’ price point; it’ll surely be a segment-first offering for its Gen-Z and millennial audiences. But, what’s with all the noise about a processor? The Exynos 9825 processor is a flagship chipset and the AnTuTu benchmark scores & Geekbench scores speak for itself. So how does this processor architecture come handy in everyday life? Well, we have the numbers! As seen above, the smartphone scores a massive score of 452000+ on Antutu. If the smartphone’s price is true, then this is the highest Antutu score by a smartphone in this segment.
Samsung claims that you can get up to 31% better performance when compared to smartphones in the same price category. Not just that, you can get up to 28% faster processing and, up to 3% faster app loading & switching.

And every premium CPU needs a premium GPU to carry out heavy-duty graphics. That’s why on the graphics front, the flagship Exynos 9825 processor is paired with the premium Mali G76 GPU. This deadly combination means you will get up to 85%
faster gaming performance. 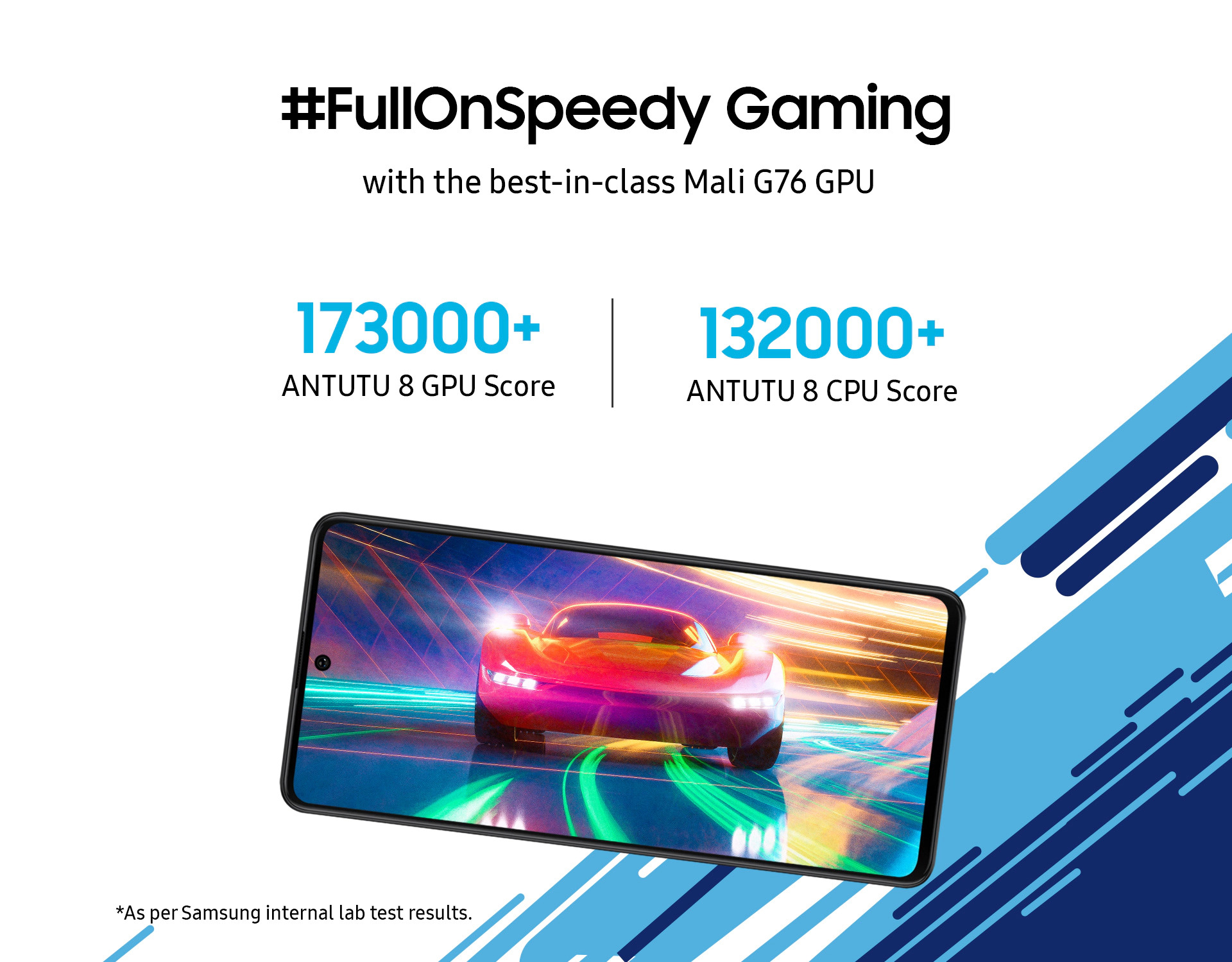 So yeah, the flagship Exynos 9825 processor is a beast, making the Galaxy F62 a #FullOnSpeedy device! 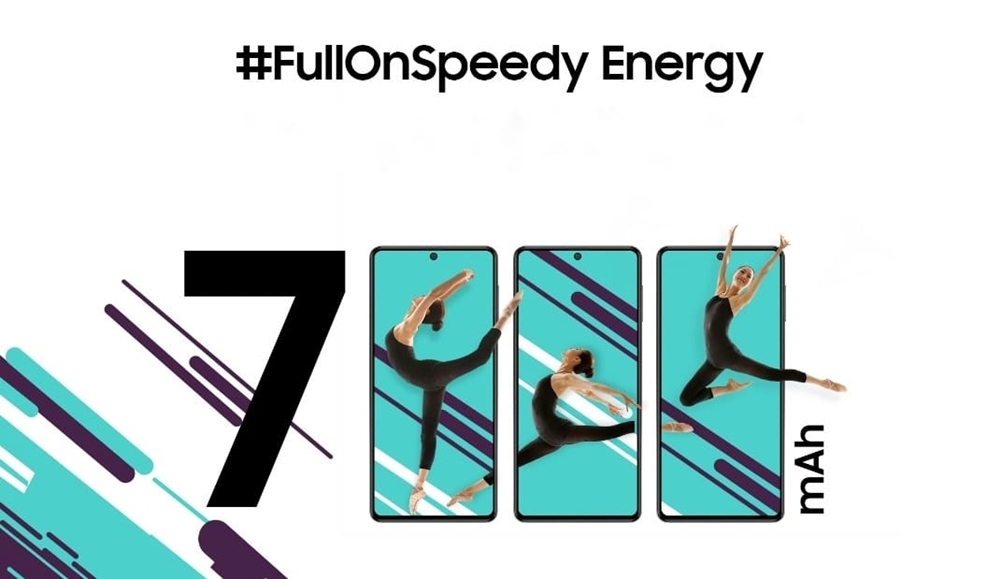 Okay, so this one is a biggie, & quite literally. Samsung has really nailed its smartphone game, and the prime example is its industry-leading battery performance. Pushing the limits to an all-new high, the Galaxy F62 comes with a massive 7000mAh battery. A 7000mAh battery means an easy two-day battery life even if you push it hard enough. Be it the never-ending binge-sessions of your favourite new show or your unstoppable gaming-streak or shooting Reels for Instagram, the 7000mAh can help you glide through it with ease. And considering the high-performance flagship processor, those who don’t go so as savage can even get 3-days’ worth of juice. And, if rumours are to be believed, Samsung will add a 25W Fast-Charger in the box that’ll juice up the device in no time.

There’s a lot more about the smartphone we don’t know yet (especially the price); but going by the reputation Samsung has built for itself, it is safe to say that the #FullOnSpeedy will be packed with BIG screen & multiple top-quality cameras. Guess, we have to wait for a few more days to find out all the details. Given the massive battery size, Samsung Galaxy F62 is the first and the only phone on Flipkart to have a 7000mAh battery making it the true battery champ on the eCommerce website.

So, how do you get your hands on to this beauty? Well, honestly, you have to wait for it a li’l longer. In this super-competitive smartphone market space, Samsung’s #FullOnSpeedy Galaxy F62 is all set to go and make its mark and how! It launches in all its glory on February 15, at 12 noon. So, if you wish to be notified the moment this smartphone hits the shelves, get notified on
Flipkart and
Samsung.com.

Make way for the #FullOnSpeedy!

Disclaimer: This is a brand post and has been written by Times Internet’s Spotlight team.