Chama Mechtaly has decided to spearhead a mission to highlight cultural bridges between peoples when politics fails to do so. Born in July 1992, this painter and jewelry designer inspired by Moorish culture, tries to «enhance the culture and identity» of Morocco.

It all started in Casablanca where she was born into a Muslim family with a Jewish heritage from her father’s side. «While growing up in Casablanca, my father had connections with the Jewish community everywhere. His nanny, the nurse at the hospital, as well as some of his teachers were Jewish. But in my case, it was not the same thing at all. I would often hear about Morocco being plural, rich and diversified without being able to notice it», she told Yabiladi.

It is then that she decided to carry out research on this aspect of Judeo-Amazigh history «which has been completely ignored». As a child, Chama Mechtaly was also «obsessed with the representation of minorities and marginalized cultures». It is for that sake that she decided to leave Morocco for Boston, USA, to study international relations and conflict resolution at Brandeis University. Chama Mechtaly’s works there focus on conflicts and trauma affecting communities amid political conflicts as well as women in peace efforts. On the side and as part of her commitment to her beliefs, she also worked with organizations for the promotion of refugees’ rights.

Art, painting and design to «fill the void»

While in the United States, the young Moroccan continued to paint and eventually exhibited her works, inspired by Judeo-Amazigh women in Morocco and North Africa.

«I felt that our history is not represented at all when you are a woman, Amazigh and Jewish, while in-depth research has highlighted the enormous contribution of these women in several fields. I wanted to talk about it and show images to bring this story closer to everyone and mainly to young people».

For the Moroccan artist and designer, «the historical split and the gaps in the way our history is taught have had bad implications for Moroccan youth». «They created an identity void which could easily be filled with radical and violent ideas since our reference to who we are did not allow for complexity. It is this same complex identity that enriches us», she explained.

In this sense, she considers that «although late», the decision made by the Moroccan authorities to start teaching the history of the Jewish community in Morocco in schools is to be «lauded». «It’s very interesting to see that after the decision (to resume relations between Morocco and Israel, ed), we are starting to witness some changes», the artist said.

She also recalls the wide distribution of Morocco’s red flag, stamped with the Star of David, which reminded her of the censorship she suffered from during an exhibition in 2015 in the Kingdom, where organizers asked her not to exhibit her painting made in 2012.

«Everything I do comes from my desire to forge links between communities and repair identity cracks and the traumas of hard times. That’s why I use art, painting and design».

Now settled down in the United Arab Emirates, the Moroccan is also working towards repairing cracks and building bridges. In Dubai, she launched «Moors & Saints», her company which today produces jewelry inspired by Moorish design. «It’s a way to enhance our culture and our identity, which does not come out of nowhere», she explained.

«Moors & Saints», calligraphy and a project in preparation for the Jerusalem Biennale

To Chama Mechtaly, her brand allows her to «continue [her] passion to forge links between different cultures, promote multiculturalism, pluralism and underline the historical links between religions and ethnic groups». «What I also teach through Moors & Saints is that Muslim empires have often become powerful because they understood the value of diversity and implemented inclusive policies. That is exactly what the Golden Age of Islam and the Golden Hebrew Age in Andalusia were about», she added.

While her brand and the several collections she launched managed to stand out, Chama Mechtaly is also working on a new project. For the past few months, she has collaborated with two Jewish artists with the aim of exhibiting at the Jerusalem Biennale. «The idea stemmed from a conversation with a Jewish artist of Syrian origin. We were discussing how to use this historic moment (the Abraham Accords, ed) to repair the cracks and talk about this separation between the two peoples», she recalled. 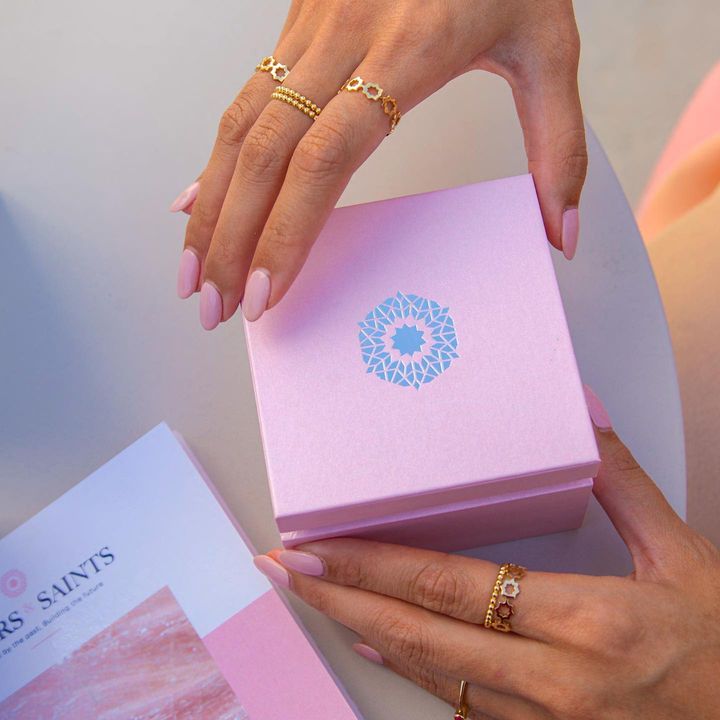 With artists based in Jerusalem and Dubai, she launched a project centered on Arabic and Hebrew calligraphy. «It is an invitation to discover and exhibit the sacred links between the two languages», explained the young Moroccan, excited for this new collaboration set in partnership with the UAE Ministry of Culture.

«When we have very tough conflicts and cracks, it is difficult to mend them just through political means.It is essential to talk about the cultural heritage that we have shared and to build bridges through this heritage».

The project is set to start before summer, as the Biennale will take place in October and November.