Danse Macabre: Theater season to open with ‘Everybody’

On that fateful day when we face death, who or what will stand at our side?

The central question of human existence is the beating heart of Branden Jacobs-Jenkins’ Everybody, which opens Binghamton University’s spring 2021 theater season with livestreamed performances March 18 to 21. It will be followed by Anna Deavere Smith’s Twilight: Los Angeles, 1992 from May 6 through 9.

A modernized adaption of the 15th-century morality play Everyman, Everybody is highly allegorical and contemplative but also comical, and addresses contemporary issues such as racism and social justice. Written by a Brooklyn-based African-American playwright, the play was a finalist for the 2018 Pulitzer Prize for Drama.

Directed by Associate Professor Elizabeth Mozer, the show features non-human characters, as well as the titular Everybody, who seek a companion to accompany them to their appointment with death.

“Everybody is the artistic embodiment of the three quintessential questions of philosophy: Who am I? Why am I here? Where will I be going?” said caat member Yangzhou Bian, a first-year master’s student in theatre.

“This play approaches these questions head-on, and while nobody has all the answers, our approach to these questions can teach us a lot about our relationships with others, the world around us and ourselves,” added Patrick Saint Ange, a sophomore English and sociology major playing the title character.

The mechanics of an online show

A year into the pandemic, the theatre program continues to adapt to circumstances that most playwrights have never envisioned: a fully digital theater experience.

Like last season’s Macbeth, the actors will safely perform in separate spaces with scenery, costumes and props made and managed by students. Currently on the table is a plan to designate some theatrical spaces on campus where students can perform solo, a benefit for actors who have to share a living space with roommates or family, Mozer said.

Last semester marked the first time the University hosted virtual theater productions, and the backstage crew learned a great deal about the process. On the crew side, preparations can take more time than a typical production, especially with musicals such as last semester’s Pippin, said Einat Beygelman, a senior majoring in theater technical design. 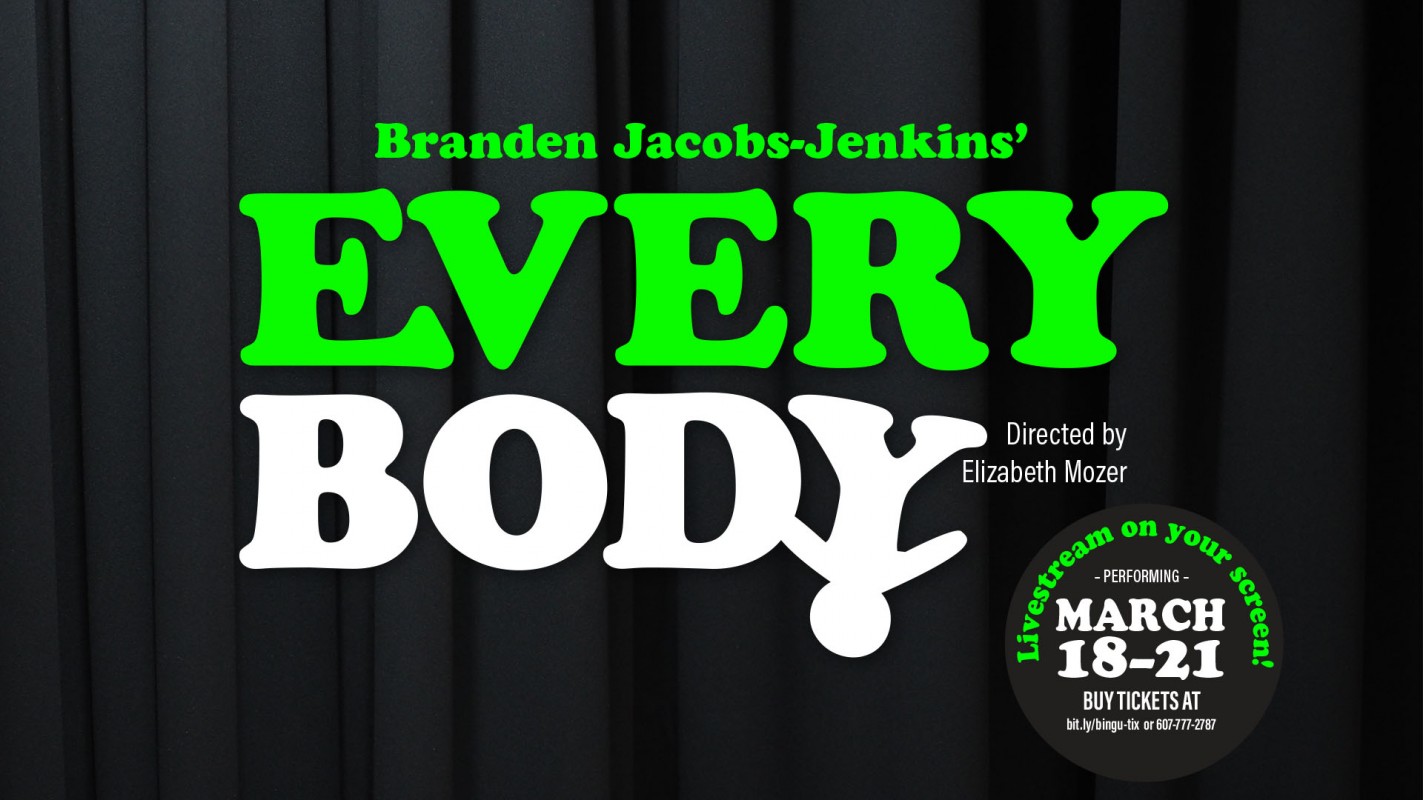 Tickets are sold through the Anderson Center of Performing Arts Box Office. Visit them online any time to purchase tickets or call 607-777-2787, noon-4 p.m. Monday through Friday.

Identical webcams and microphones give virtual productions a consistent sound and image from actor to actor, Beygelman explained. Sound designers also conduct sound checks prior to the final recording of scenes, and make sure the computer system is sharing the audio correctly during live performances, just as they would do at the audio console during a traditional show.

Even with state-of-the-art technical wizardry, however, online performances can’t recreate one of the essential components of live theater: the communal experience of an audience physically watching a performance together, Mozer acknowledged.

But theater is finding other ways to speak to the audience, connecting them with stories and art during a time of great collective upheaval.

“I think this play lends itself to an online format because of how abstract it is and, in fact, I think this new format allows us to experiment with new, interesting ways of telling the story,” said Saint Ange, who participated in several online performances last semester. “The camera can pick up a lot of subtle performances that I think the audience may respond to differently than they would had they seen it on a stage.”

Mozer agreed. The screen changes the directionality of a scene: Actors can move in for a close-up, for example.

Actors and theater audiences can’t rely in the same way they usually do on physical staging. Instead, they may experience a renewed relationship to listening and discover more subtle behaviors that might otherwise be lost on a stage, she said.

Everybody also includes an extra treat: “La Danse Macabre,” a performance choreographed by new faculty member Neva Kenny. The visiting professor came to Binghamton in August from Bogota, Colombia, where she chaired the performing arts program at Pontifical Javeriana University.

Unlike the rest of the performance, the three-minute dance will be pre-recorded in Watters Theater; dancers Derek Kunz and Jessica Mei will perform masked and socially distanced. Kenny also worked with cinematographer Arleigh Wasserman and student assistant choreographer R.J. Fox to create the piece.

Teaching a highly physical artform during a pandemic presented its own set of challenges. Kenny taught many of her classes in person last semester, with students dividing their time between in-person and online classes to accommodate social distancing needs. They danced together on the grass, and worked on projects in pairs. Choreography often involved a simple set-up, such as a lone chair, enabling students to dance wherever they were.

“La Danse Macabre” will be the first time the dancers have worked with the camera.

“Human adaptability never ceases to amaze me. I hope to generate opportunities for the students at Binghamton University to nourish their creativity, vulnerability and confidence to better understand themselves and, in turn, contribute to a more authentic world,” Kenny said.

The casting of lots

One unusual feature about Everybody: It’s written so that anyone can perform any role, with the casting determined by lots. That’s central to the ultimate meaning about the vagaries of fate; just like life, you never know whether you’ll be in a starring or supporting role, Bian said.

The actors play multiple characters, which provides a welcome challenge for both the performers and the director.

The role of Everybody is quite literally that, Saint Ange explained: a single mother from Queens, a billionaire real estate mogul, a rock star, a janitor — everyone who faces death, which is all of us.

“Death is the great equalizer and we’re all facing it together,” he said.

That’s a particularly apt message during a pandemic, when many people have lost family and friends, Saint Ange reflected.

So, too, is the randomness of fate in the time of COVID: While most of us take precautions to avoid catching the virus, you never know quite what will happen or just how you’ll fare, Mozer said. These circumstances would have been familiar to the unknown authors of the original Everyman, written in a period when the plague was scourging Europe.

“Art has been so essential during this pandemic. I feel like we’re learning how much we value art, how much we miss it in this time — going to museums, going to concerts, going to the theater,” Mozer reflected. “We’re dealing with incredible obstacles to have live theater, so that tells me that it’s something very basic to humanity.”