Taylor Swift’s re-recordings of hit tracks from her album Fearless will be eligible for performance Grammy awards – but not for any songwriting accolades.

By re-recording the entire LP, the singer is taking back control of her music after record exec Scooter Braun sold them in November 2020. 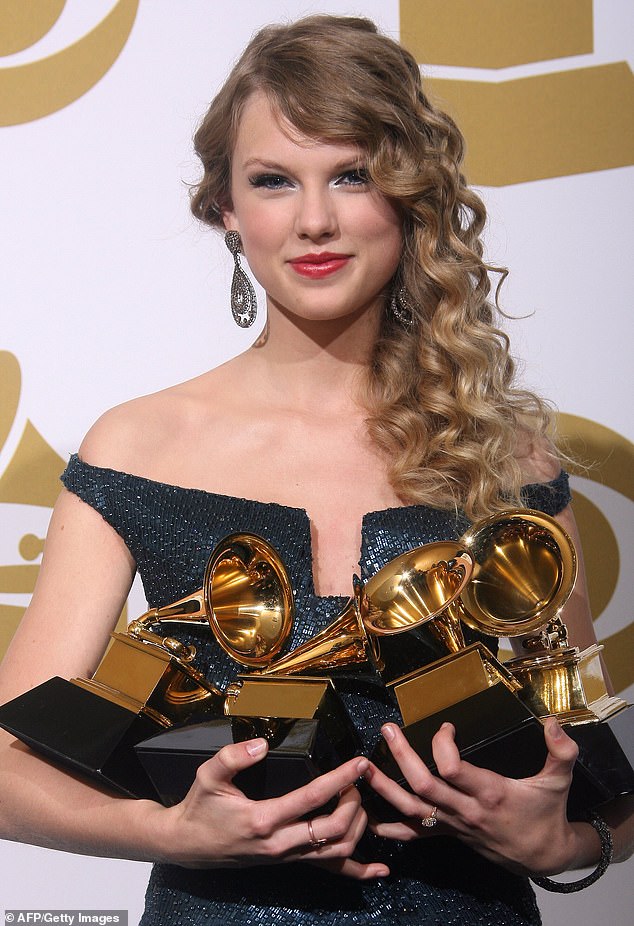 Good news: Taylor Swift’s re-recordings of tracks from her album Fearless will be eligible for performance Grammy awards – but not for any songwriting accolades (pictured at the 2010 Grammy Awards in LA)

And now the Recording Academy has stated that the re-recorded tracks, including Love Story, will only be allowed to be nominated for performance, not songwriting.

A Grammys spokesperson told Billboard: ‘Current eligibility guidelines would allow for the new performances and albums to be eligible if they were recorded within the last five years.

‘However, none of the older songs would be eligible for songwriting awards.’

That rule doesn’t apply to the six new tracks Taylor is intending to release alongside her classics, which can be nominated for songwriting prizes as well. 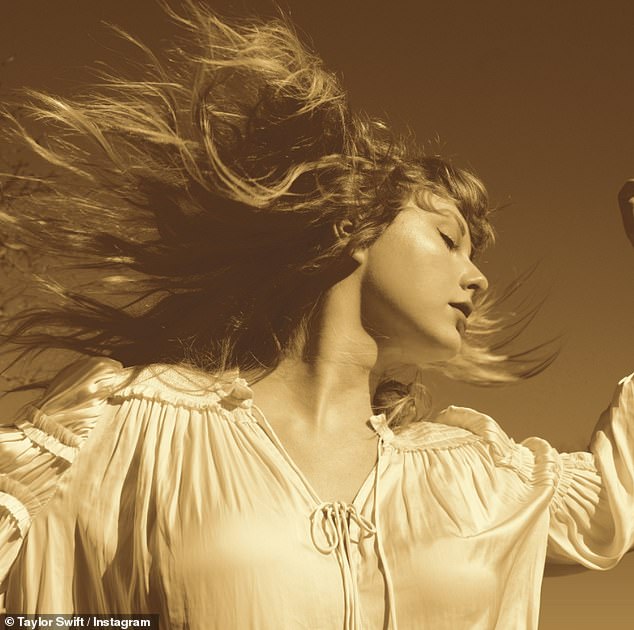 Re-recordings have won Grammys before, with Elton John taking home the gong for Best Male Pop Vocal Performance in 1997 after he re-made Candle in the Wind.

Taylor’s re-recorded version of 2008 single Love Story is already off to a strong start after earning 10,000 download sales in its first day.

The new recording of Love Story was released after midnight on Friday, February 12, but it quickly eclipsed the original song’s current sales and even beat out many other contemporary tracks, according to Billboard. 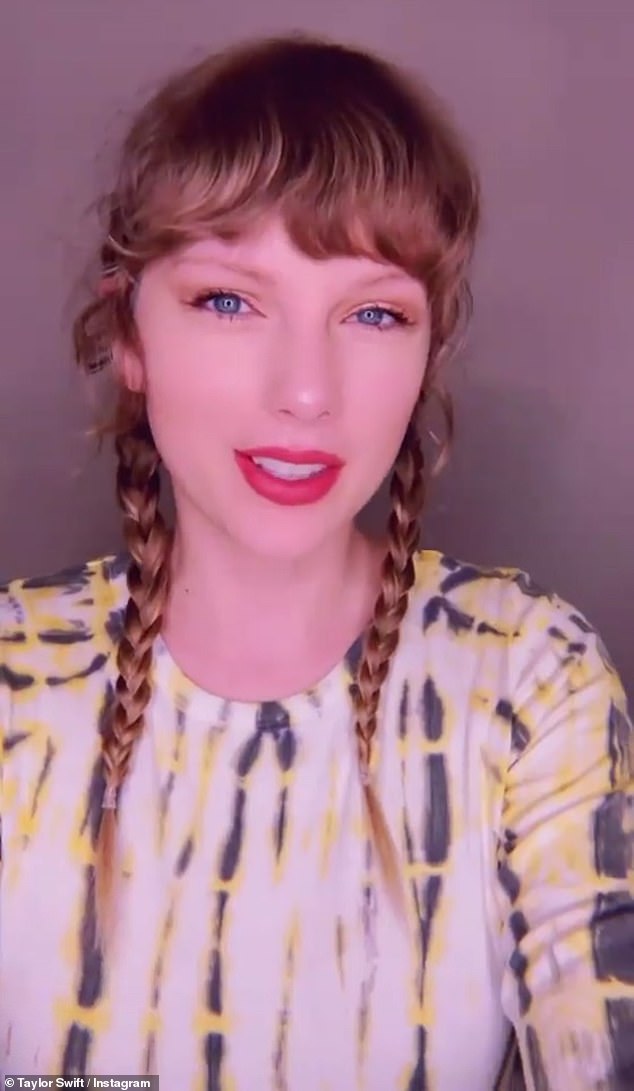 Going well: Taylor ‘s re-recorded version of 2008 single Love Story is already off to a strong start after earning 10,000 download sales in its FIRST day

That’s particularly impressive, as it was only on February 11 that Taylor announced she had re-recorded the album and announced the single’s release the following day.

Compared to the re-recorded version, the original Love Story only sold 200 downloads on February 12.

The song has sold a total of 6.13 million downloads since it was released 12 years ago, but it had only sold a ‘negligible amount’ in the days leading up to the new version’s release.

The two versions have been described as fairly similar, and Taylor even used the same musicians on her new track as she did on the original, according to Pitchfork. 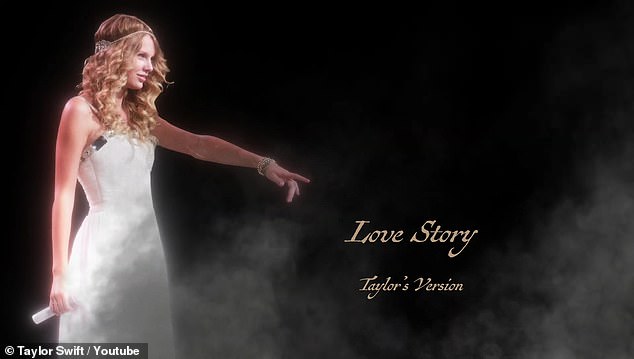 In control: Slightly tweaking the title to include ‘Taylor’s Version,’ was her way of letting her fans know that she was back in full control 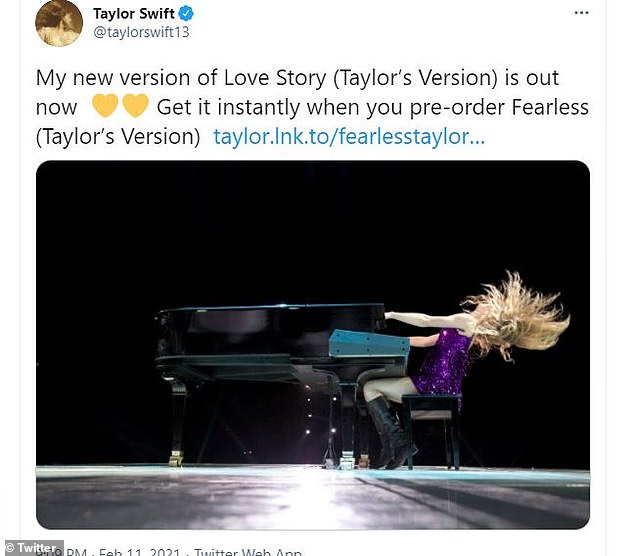 Exciting: The new album will feature re-recorded versions of all Taylor’s Fearless tracks as well as six new tunes

This ensures that the same people who help craft the original recording will continue to be paid for their performances as people download and stream the new song.

Last week the Shake It Off hitmaker announced the hotly anticipated re-issue, saying on social media: ‘I’m thrilled to tell you that my new version of Fearless (Taylor’s Version) is done and will be with you soon.

‘It has 26 songs including 6 never before released songs from the vault. Love Story (Taylor’s Version) will be out tonight.’

The album is available for pre-order, and a hidden message in an accompanying note suggested it could drop in April.

In a lengthy statement, she added: ‘Artists should own their own work for so many reasons, but the most screamingly obvious one is that the artist is the only one who really *knows* that body of work. 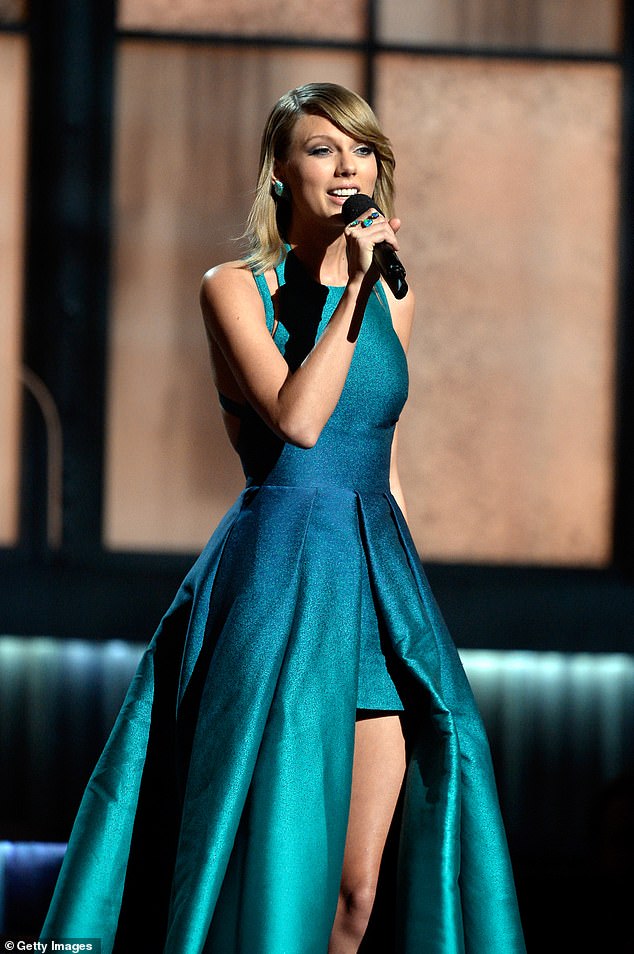 In the running: Taylor’s new tracks can be nominated for songwriting prizes at the Grammys as well as performance accolades (pictured at the Grammys in 2015 in LA)

‘For example, only I know which songs I wrote that almost made the Fearless album.

‘Those reasons seem unnecessary now. i’ve decIded i want you to have the whole story, see the entire vivid picture and let you into the entire dreamscape that is my fearless album.

‘That’s why i’ve chosen to include 6 never before released songs on my version of this album. written when i was betweeN the ages of 16 and 18, these were the ones it killed me to leave behind.’

Now in full control over her first six albums (after Scooter Braun sold the masters in November after acquiring her former label Big Loud in June) she has been able to re-record her full catalog under her new label Republic Records. 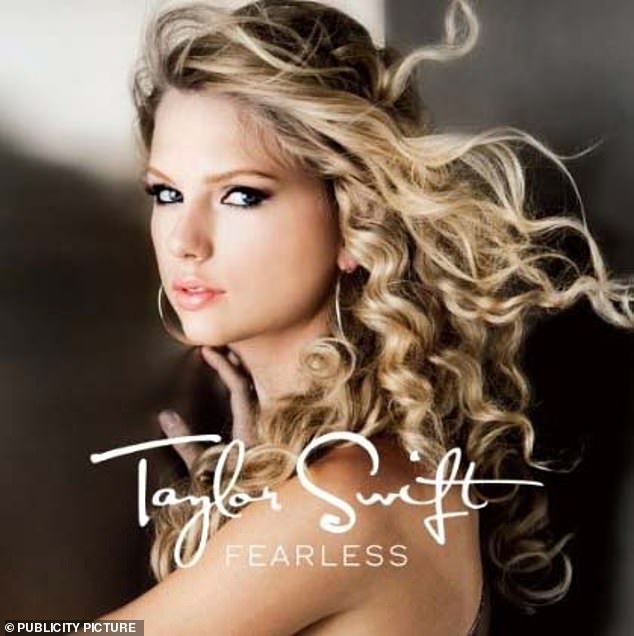 New edition: The singer penned an emotional essay about the ‘fulfilling’ process of re-recording her tracks as she announced the release (original album cover for Fearless pictured)

In June 2019, the award-winning artist claimed record exec Scooter, 39, released her studio albums and took ownership of her masters in a $300million deal without her knowledge.

Taylor has been re-recording her music released from 2006 until 2017, after her entire Big Machine Label Group catalogue was sold to Scooter.

Reputation was her last album under her 12-year contract with Big Machine Records, before she signed a new multi-album deal with Big Machine’s distributor Universal Music Group in November 2018.

Although the catalogue was re-sold to Shamrock Holdings, the media personality has been able to take control of her records by re-releasing the songs, as per her contract, according to EW. 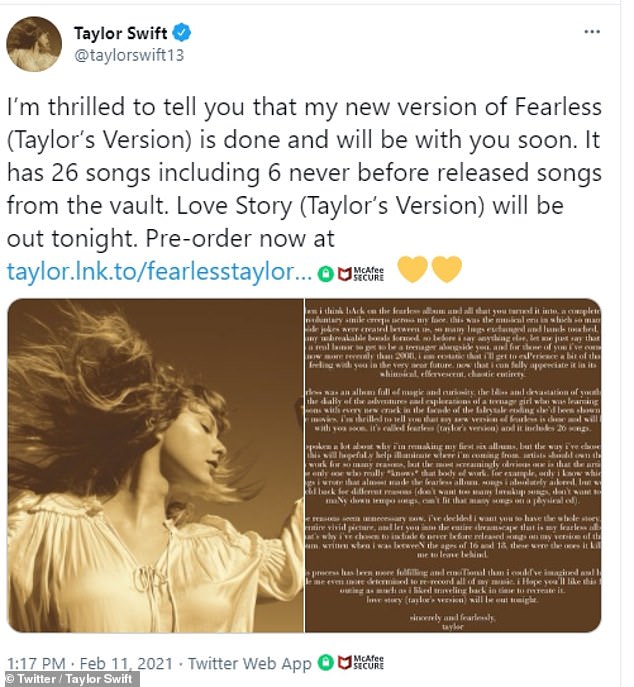 Her side: The musician sent her fans wild as she made the shock announcement during Thursday’s Good Morning America, confirming the album will feature 26 songs in total

Taylor had accused Justin Bieber’s manager of ‘manipulative bullying,’ and since the sides, through friends, have publicly had a he-said-she-said.

Her lawyer previously explained: ‘Scott Borchetta [former owner of Big Machine Records] never gave Taylor Swift an opportunity to purchase her masters, or the label, outright with a check in the way he is now apparently doing for others.’

The deal may even rise as high as $450 million, according to the entertainment publication. It included all the songs of her first six albums, along with all her music videos recorded within that time frame, and her album artwork. 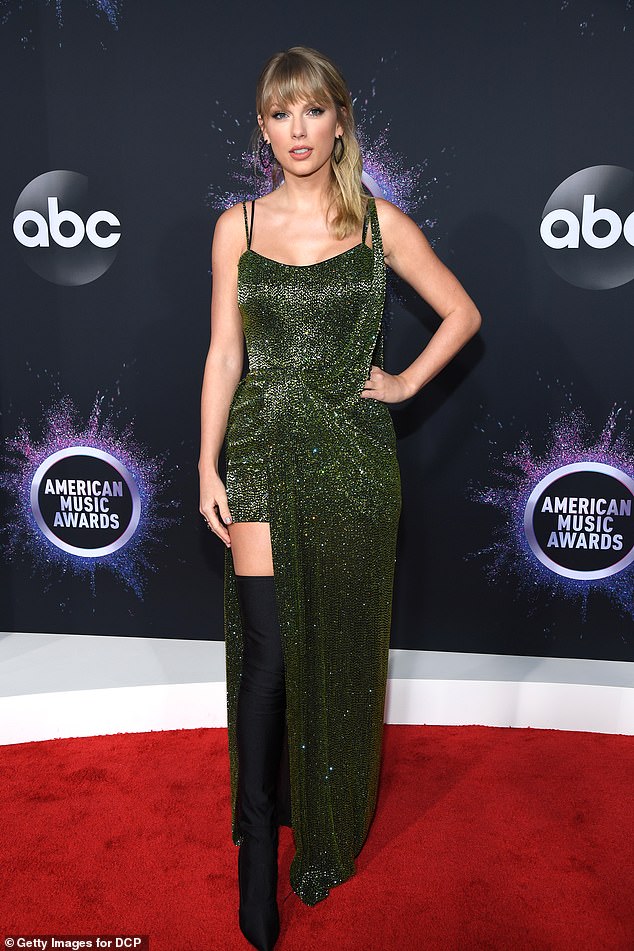 Strong start: Taylor Swift’s re-recording of Love Story earned 10,000 download sales on its first day of release, according to Billboard; seen in 2019 in LA